Let me get straight to the point: it would be great if all of us, somehow connected to design, aimed at being Homo Universalis, or as it’s commonly referred to today a “Jack of all trades”. To go a little further, many of us already are. As much as we regard ourselves specialists in some field, I think that various interests and every day activities show that we are not specialists at all. But, let’s go back a little.

A story from the 15th century

To explain and corroborate my claim, I’d like to go back some 500 years to renaissance Italy. In the time of humanism and renaissance in Italy, a thought emerged that “a man can do all things if he will”. The chief idea was that men have the potential for immense education and improvement in various areas. Ideally, this would encompass all known areas of arts and science. This is where we get the terms Polymath, Renaissance man or Homo Universalis. Today, a more accepted term is Generalist or Jack of all trades, even though these terms are often used in the wrong context, sometimes even negative one. You can read about Renaissance Man and Renaissance humanism on Wikipedia.

Typical representatives of that movement are Leonardo da Vinci and Michaelangelo Buonarotti. The first association to da Vinci is the picture of Mona Lisa, but it is definitely not his most significant work. He wasn’t only a painter but a sculptor, architect, musician, scientist, mathematician, engineer, inventor, anatomist, geologist, botanist and writer. And he was good at most of these. If this sounds incredible, then you will be amazed by the fact that his inventions were hundreds of years ahead of his time. He drew blueprints for airplanes, helicopters, submarines, tanks, even concentrated solar power! It would take 500 years for his ideas to see the light of day.

Another “giant” of that time was Michaelangelo Buonarotti. According to Wikipedia, he was a painter, sculptor, architect, poet, and engineer. Those, a little more versed in Michaelangelo’s life, will know that this is a sin he would never forgive – to call him a painter before sculptor. Michaelangelo, apparently, hated painting, publicly criticized and deprecated it. The irony is that he is mostly known for his painting and one of the greatest painting feats in the history of mankind – the painted walls and ceiling of the Sistine Chapel. He was, however, an excellent sculptor. His works are the pinnacle of sculpting world wide. Also, he was a very successful architect, just look at the dome of St. Peter’s Basilica.

Although these two are the most famous, they are certainly not an exception, which is the point of my story. Almost every artist of that time had the same idea and aimed at achieving universal knowledge. Some had more success than others, but the want and craving existed which affected the art of the period and left tremendous heritage to posterity.

So, what does this have to do with today? Everything. Rennaissance Humanism is based on rebirth of Latin and ancient Greek values, which are the foundation of modern civilization. People like da Vinci and Michaelangelo have left us not only the greatest works and ideas but also a model where “universal knowledge” is undoubtedly possible.

However, universal knowledge must be put in today’s context. Although, during the Renaissance the Polymath had knowledge in arts and sciences, today it is a very large set of areas which is impossible to master. Industrial, technological and later information revolution have expanded the man’s complete knowledge to unthinkable limits. Therefore, a Polymath of today would be a man (or a woman) possessing the knowledge of related fields. Da Vinci of today would, apart from web design, have the skills in UI design, interaction design, UX design, usability, front-end development and so on.

Diversification of knowledge helps, not obstructs

It certainly doesn’t mean that a Polymath should be an expert in all fields, just as it wasn’t the case with renaissance Italy artists. He could be a top UI designer, web designer and front-end developer and also have solid knowledge in other areas. This is how I look at this: 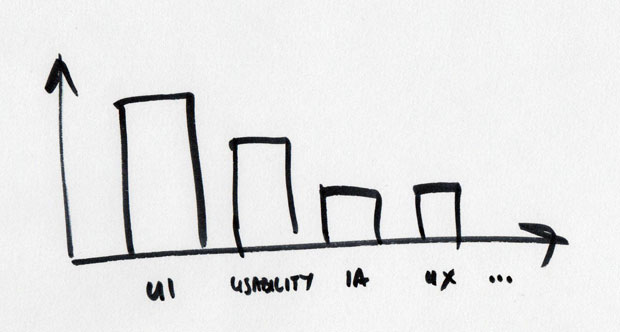 I believe that many can draw a similar diagram of their knowledge. How ever subjective, it will contain several specialties which you work with and possess a certain amount of knowledge in them. Secondary skills, summed up, can be greater than one primary area. I know what you are about to say, that someone’s knowledge in total is not a simple sum of skills from other areas. And you’re right. Someone’s total knowledge is actually a synergy of their co-effects, meaning that by leaving out secondary skills you lose the big picture of someone’s actual knowledge. Therefore, if you have other skills, don’t discard them in fear of being characterized as “Jack of all trades, master of none”.

Master of one or none?

The point is not to be a master of none. But, neither is it to be the master of one. The point is to expand your skills to become richer, more experienced and better because you have the ability to see the bigger picture. So, you can be a master in some areas and very good in others. Is there a law of nature that says that you can be a master of only one? Where’s the limit? What’s stopping you? Living in the fast lane? Lack of time? Social guidelines? Money? Commercializing all values? Think again as to what are the real obstacles and what are the excuses?

In the end, isn’t it human nature to research and expand one’s skills? Wasn’t exactly that that allowed us to become who we are now – sensible, rational beings? Many species which have specialized in one area of life or nutrition have become extinct and, even today, are an easy prey of the evolution. We are where we are, the ultimate surviving machines.

I know that many will not agree with what I’m saying and that for some specialization is the right choice. There were attempts to stand in defense of the jack of all trades. Still, my impression is that the predominant opinion is that specialization is the only right choice. And it’s ok if you think so. However, I know that most of us can do it. If you have taken the Design something every day challenge, it’s a good start. You could also learn something every day. Buy a book. If you are, for example a designer, learn usability. If you are a graphic designer, learn web design.

Why don’t we renew these values lost somewhere along the road of universal human progress? What’s stopping us?

Remember RSS? You can subscribe to my blog here.